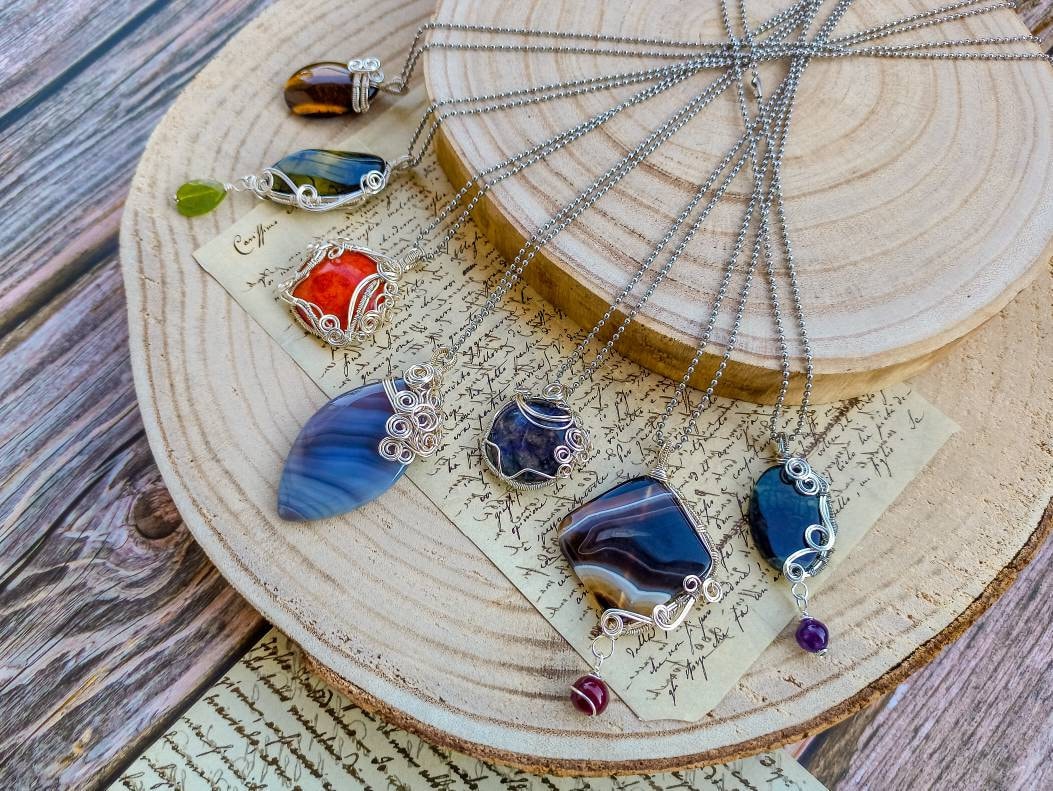 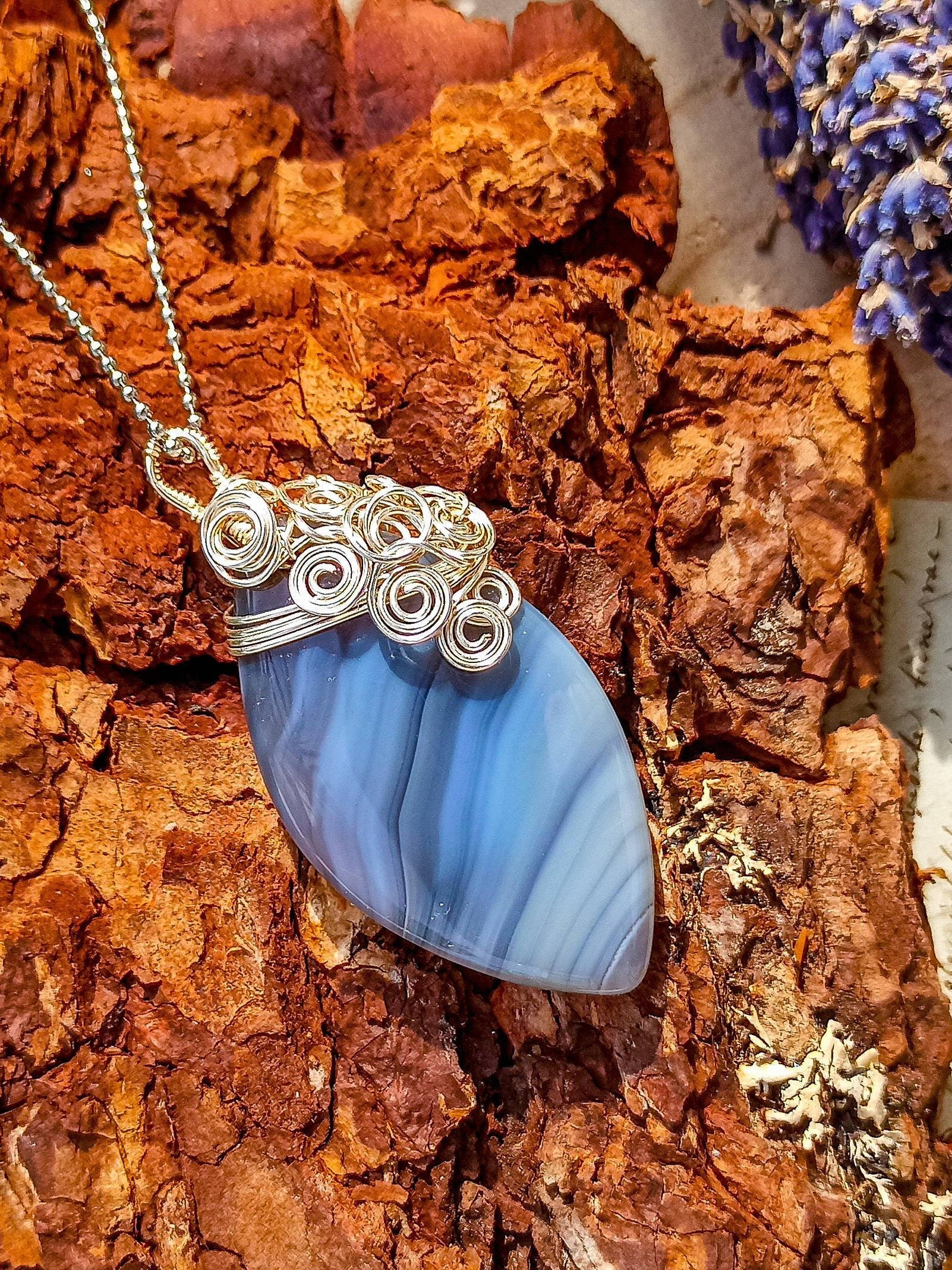 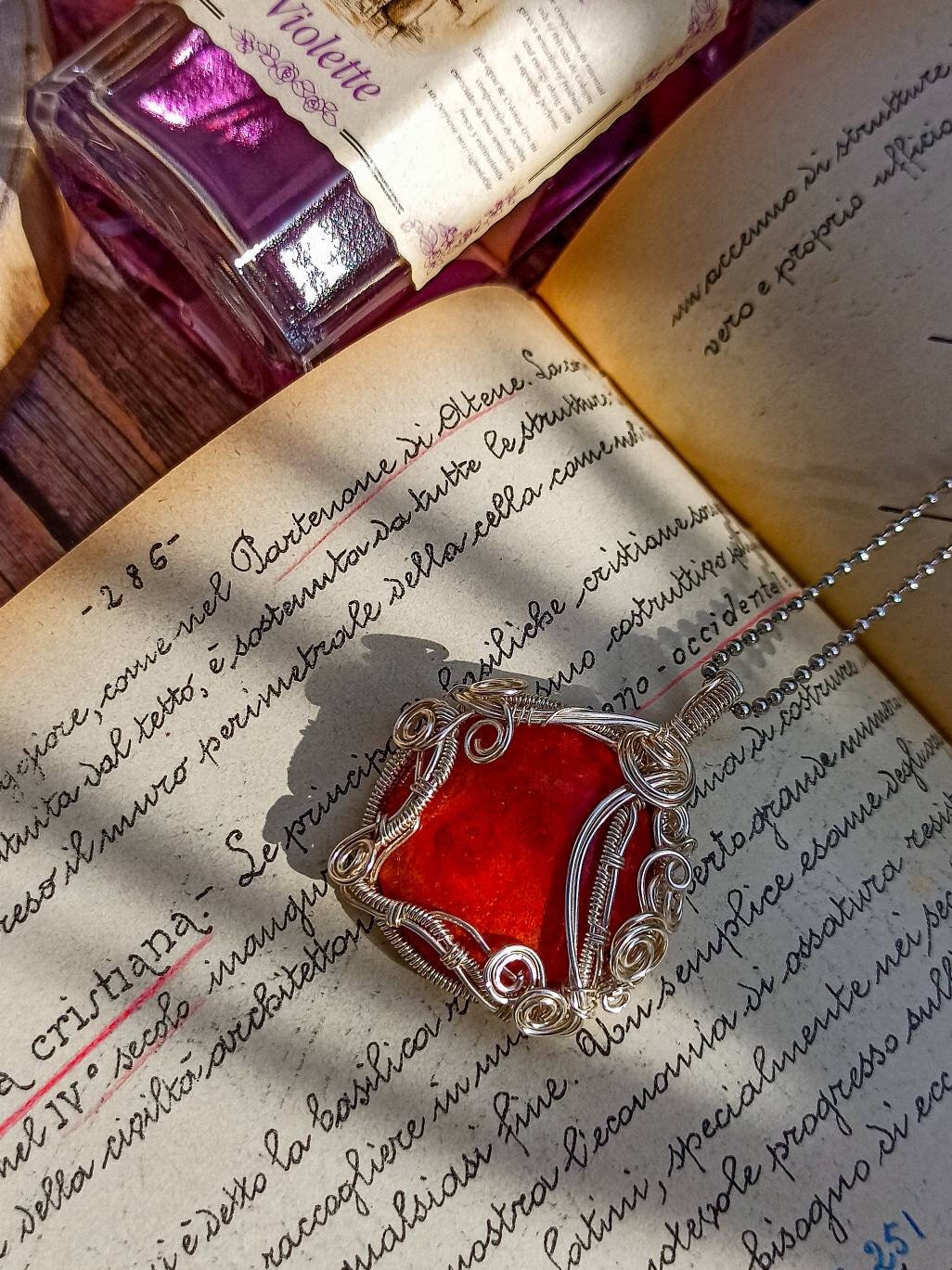 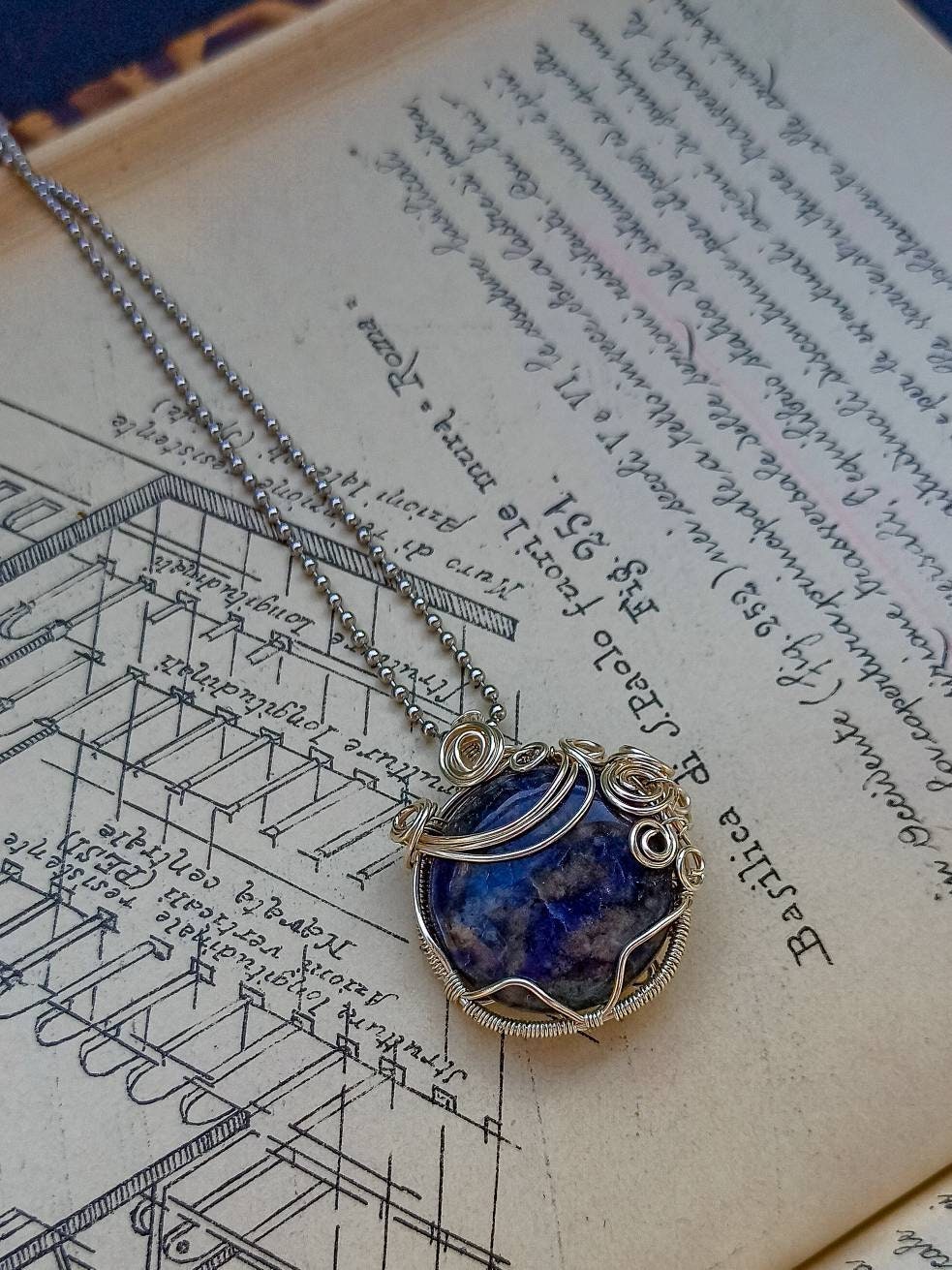 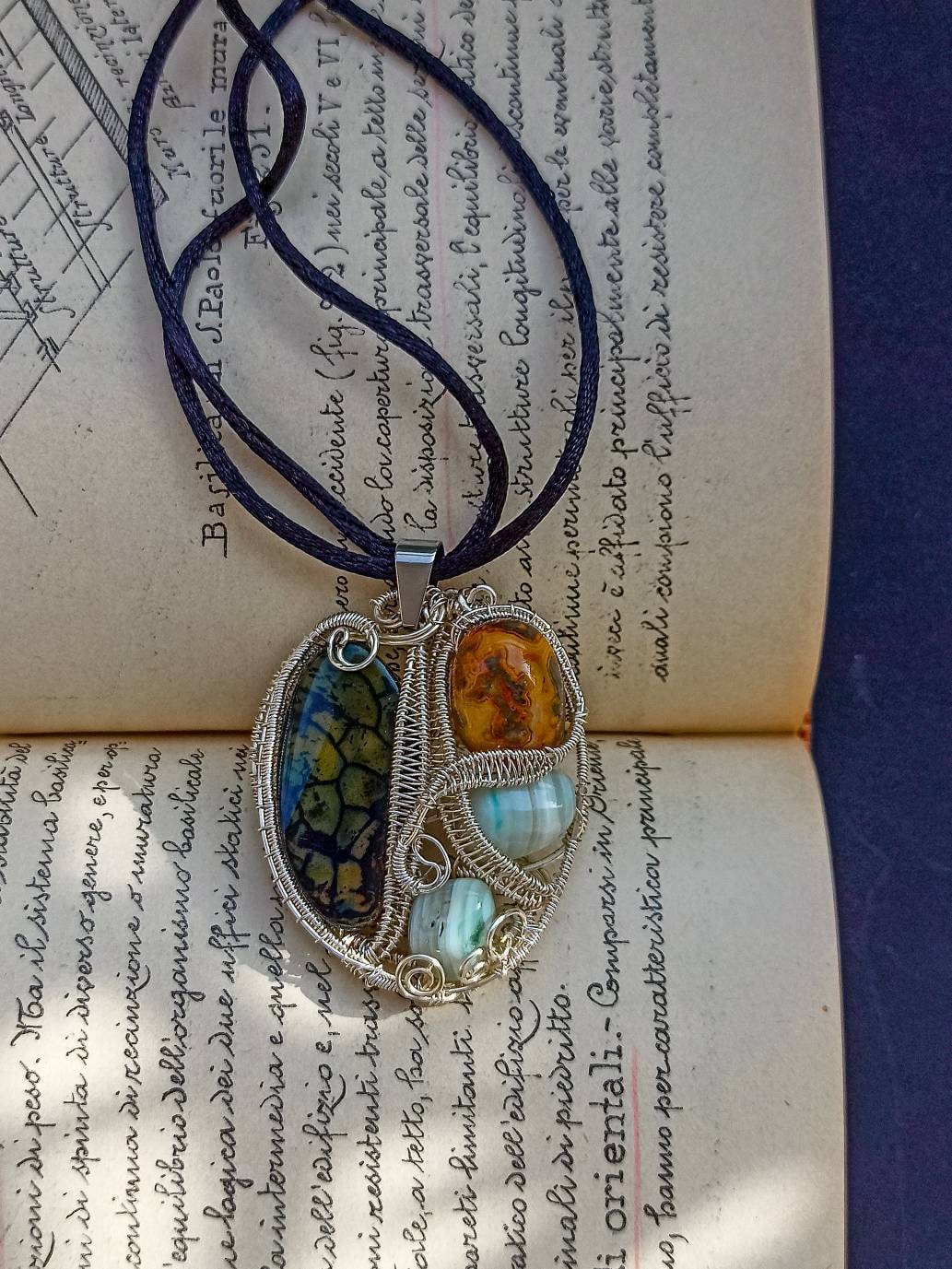 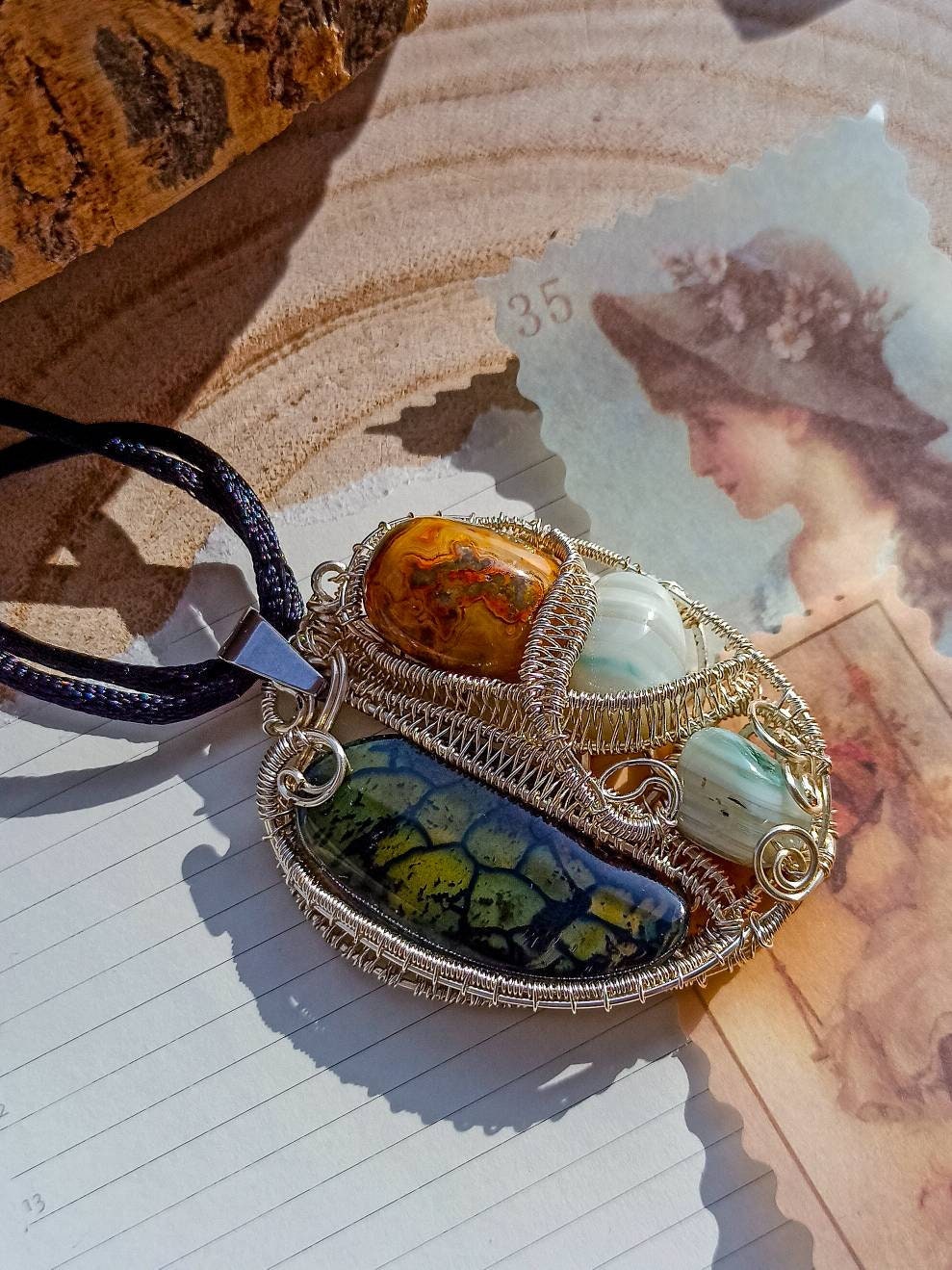 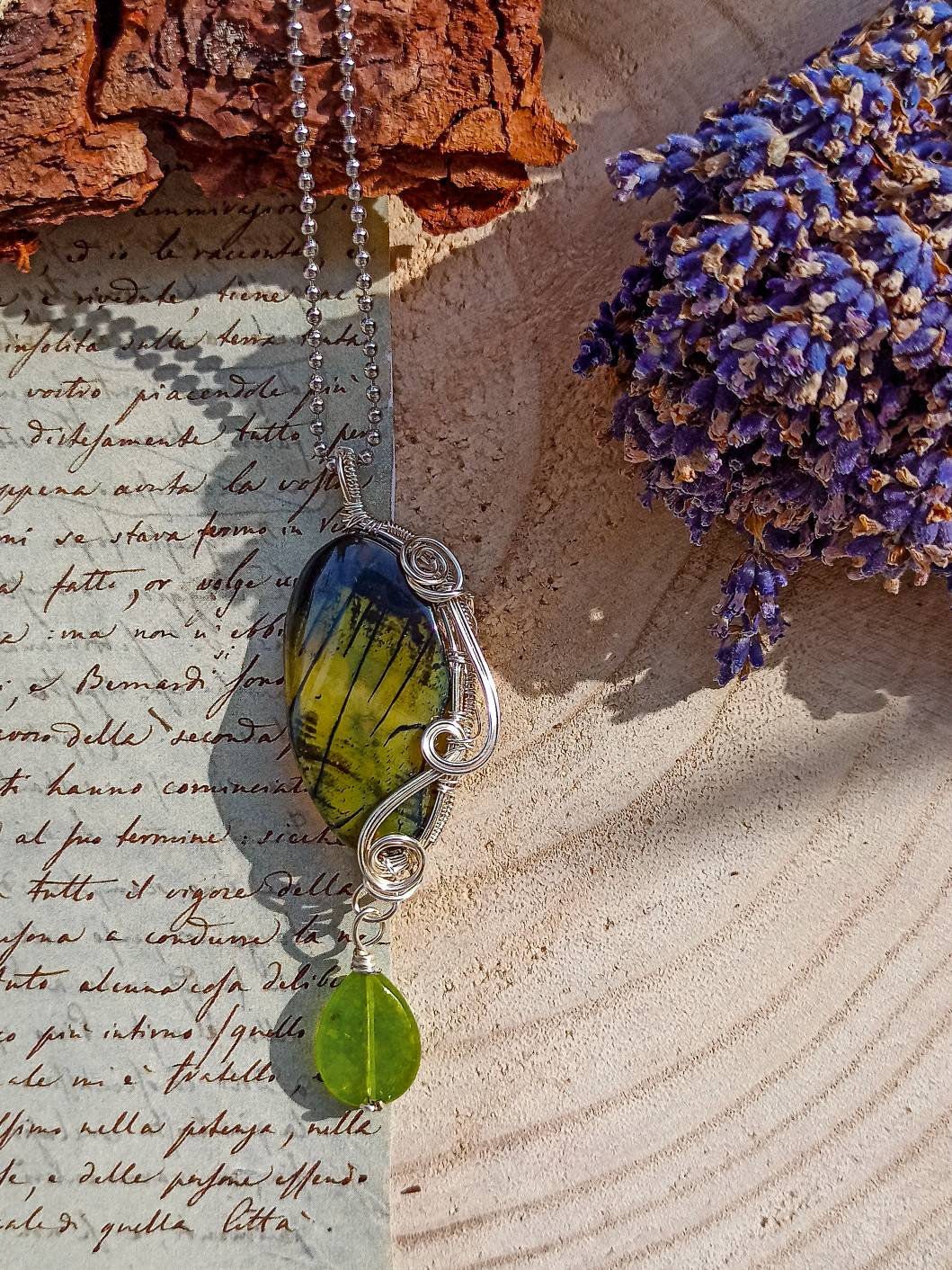 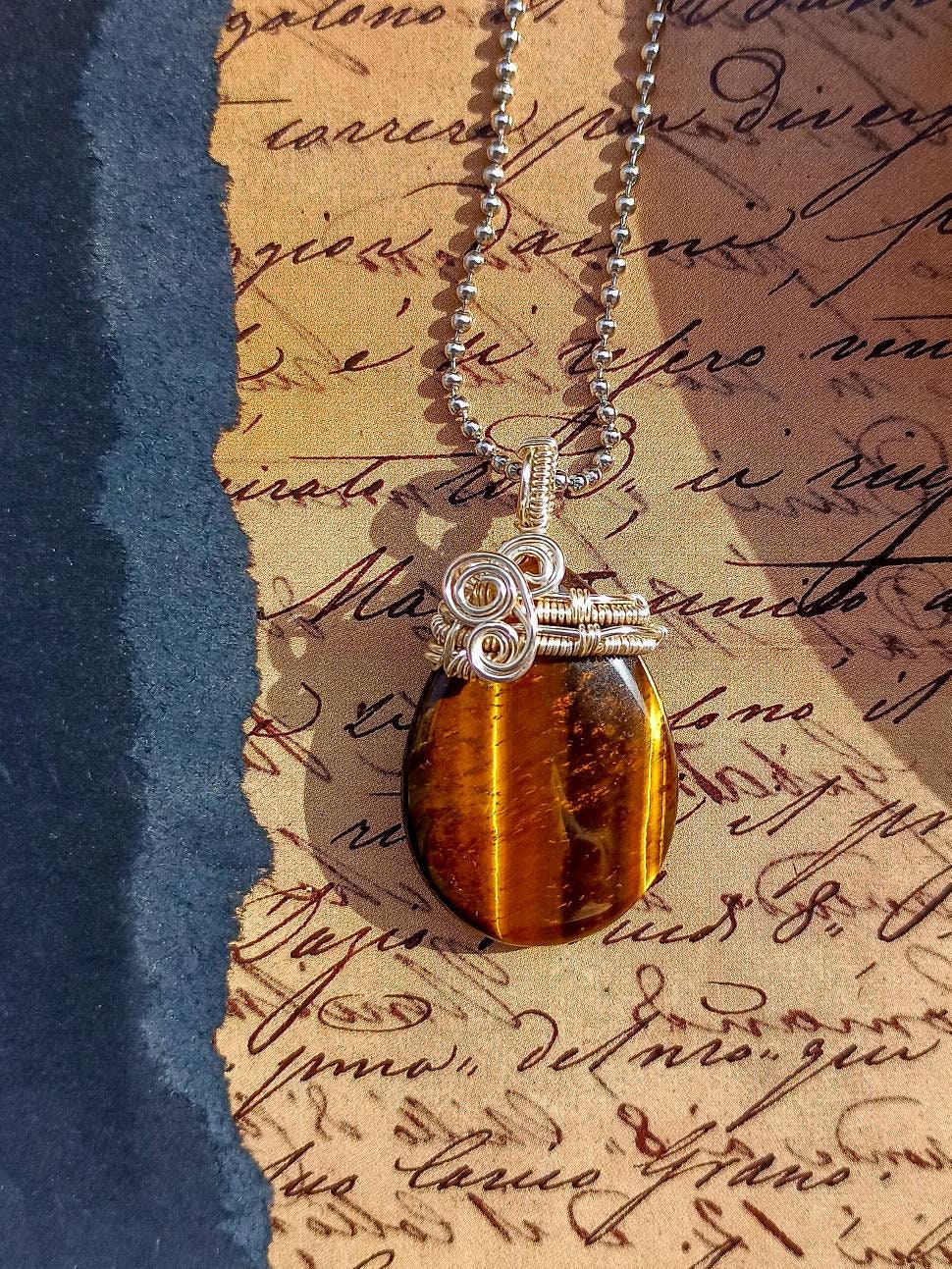 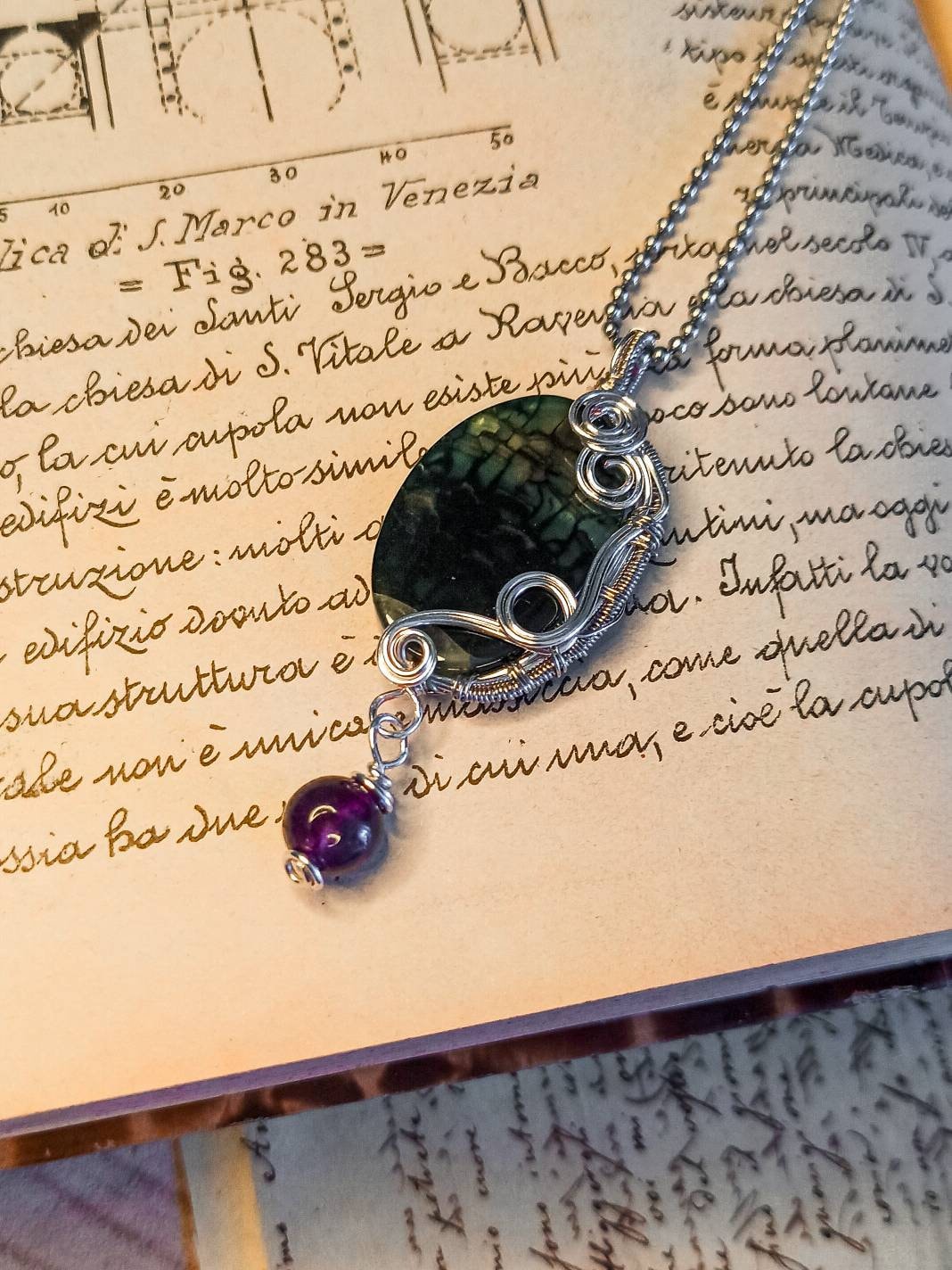 Pendants made with Wire Wrapping technique and Agate and other gemstones.
The pendants are made with non-tarnish silver-plated copper wire with anti-oxidant treatment.

The Wire Wrapping technique allows three-dimensional shapes to be created only by wrapping metal wires together or incorporating other elements (pearls, crystals, hard stones, polymer clay components). The peculiarity of the technique compared to other metal processing is that it does not make use of welds, it is all completely cold executed.

When ordering choose the desired variant.

Agate is a stone that dates back to the origins of man, in ancient times. It has often been used as an ornamental stone and used for precious jewels, to seal the ancient edicts and is mentioned in the main sacred texts. The name agata derives from the Greek "achates", the name of the river where in ancient times multiple quantities of this stone were found and extracted. The meaning attributed to the agate is "stone of magic that brings calm and peace". It is a unique stone that we can find in various colors.

The tiger's eye is a variety of gold-colored quartz with darker streaks in the center due to needle-like and parallel inclusions of crocidolite, responsible for the particular optical effect called "gatteggiare", which gives the impression of observing the pupil of an eye.
It was the similarity with the eye of the feline that led to the choice of the name and to the ancient belief that it is thought to have beneficial effects on the eyes.
The Roman soldiers carried a tiger's eye to battle on which were engraved lucky symbols. In the Middle Ages the tiger's eye was used as a protective stone against spells and demons. It was also used to attract wealth. Also in Islam it is considered a lucky stone.
The tiger's eye helps to overcome difficult moments and not lose courage and self-confidence. It allows you to defend yourself from oppressive situations and from people who tend to control and invade the space of others.

Coral Root is the least valuable part of coral, but it is also very beautiful to include in jewels.
Coral is a material of marine origin that grows only in clear and unpolluted waters and not subject to tidal phenomena. It is the skeleton produced by tiny organisms (Cnidaria Gorgonacea Corallium) that secrete a calcium carbonate that allows them to live in large colonies that over time form atolls and cliffs.
There are different types and shades of color, from red to white, blue, brown and black, although 90% of the red coral comes from the Mediterranean.
The coral has a very ancient history in which a set of legends exalts its supposed therapeutic and superstitious virtues that are reflected both in the oriental culture and in the western one. He played an important role in religious and magical rites throughout the Pacific islands and is considered an amulet against the evil eye.

The sodalite is opaque and of an intense gray blue color with white streaks of feldspars. The name sodalite means "sodium stone" and was discovered recently, so no information is available about its traditional use. Its classification distinct from that of lapis lazuli is recent, which is why the virtues of the two stones were confused: sodalite like lapis lazuli symbolizes the starry night and the depth of the sea and evokes a divine and magical dimension.
According to a legend told in the area of ​​San Salvador de Bahia in Brazil, a young woman fell in love with a man with a heart of stone who rejected her. Sorrowed by the refusal, the woman committed suicide. When he knew it he fled crying, realizing he had lost a true love and the union between his tears and the blue of the sky gave birth to sodalite.
Sodalite is a healing stone. It promotes idealism and stimulates the desire for truth and knowledge. It allows you to live your life according to your wishes and remain true to yourself. It strengthens the sense of one's identity and the capacity for self-assertion, helps to overcome the obsolete mental patterns and behavior patterns that constitute an obstacle to personal growth and to accept to live the present without worries.

Pendant with Agate and Avventurine.
I have set four different semi-precious stones in a single design: two agates, one of which is dark green and one orange, plus two small green aventurine stones.
Long chain with double shiny black silk cord, silver nickel free metal clasp and hook.

Adventurine has the ability to improve the sense of humor and joy of its user. It is also an excellent balancing stone for aventurine, it gives inner balance and stimulates dreams.
It has a positive effect on the psyche, reinforcing a sense of individualism, and aventurine is the ideal stone for those in search of a positive vision of life.

But please contact me if you have any problems with your order.

0 items in your cart